The Gift of Football

It's the most wonderful time of year -- unless your favorite National Football League team is fighting tooth-and-nail for a playoff spot.

Each day leading up to the game only adds to a fan's tension -- mainly because the situation is completely out of their hands. The players and coaches will determine the outcome, and all a fan can do is watch and hope for the best. 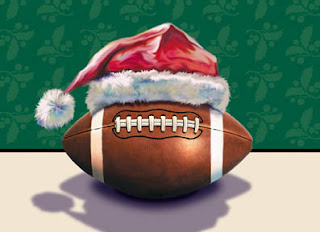 It's that time of year
The New York Jets had essentially been involved in playoff games since Week 12, when they were languishing with a 5-5 record. After wins against Buffalo, Washington and Kansas City, the Jets suddenly had a Wild Card spot within their grasp.

Last week, however, Gang Green stumbled -- suffering a 45-19 blowout loss at Philadelphia. Now at 8-6, the Jets still had destiny in their hands -- but needed to win their final two games to assure themselves of an AFC playoff appearance. 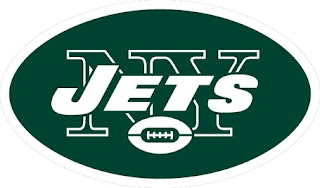 A win against the Giants would keep the Jets' playoff destiny in their hands
The New York Giants were seeking a different path to the playoffs. After starting the season with a 6-2 record, Big Blue was in the midst of a freefall, having lost 5 of their last 6 games, including an embarrassing 23-10 home defeat to Washington.

Despite their struggles, a NFC East division title remained within their sights. Winning their final two games would not only get the Giants into the playoffs, but would also let them host a postseason contest. 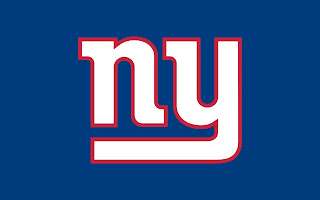 A Giants win over the Jets would keep their NFC East title hopes alive
For many, the morning of Christmas Eve involves present-wrapping and making final holiday preparations. On this day, however, over 79,000 Giants and Jets fans got together at their shared home in the Meadowlands for a critical NFL regular season game.

The parking lots surrounding MetLife Stadium featured a mixture of Giants' blue and Jets' green -- sometimes intermingled together among tailgating parties. Whatever rivalry that exists between the fan bases was temporarily suspended while food was served and drinks -- including holiday-appropriate egg nog -- flowed before the game. 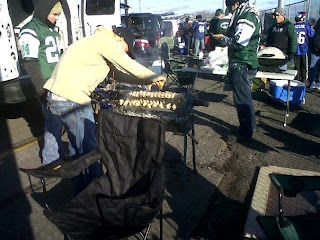 Green and blue together during the Christmas Eve tailgate
There is an interesting dynamic between the Jets and Giants. They co-own the stadium in which they play, and have shared stadiums at the Meadowlands dating back to 1985. The two teams play annually in the preseason, but rarely in the regular season.

Despite that cooperation among the franchises, there is an underlying tension, especially among their fans. 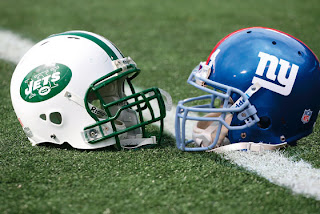 Aside from the stadium, there are few similarities between the Jets and Giants
The Giants represent the old guard of the NFL. Established in 1925, the team is rich in tradition, accumulating four NFL championships and three Super Bowl titles along the way. The Giants boast 15 Pro Football Hall of Famers.

The Jets are the upstart "kid brothers" in the New York metropolitan area, having started play in 1960 as the Titans of New York in the fledgling American Football League. After becoming the Jets in 1963, the franchise only won one championship -- Super Bowl III in 1969, which paved the way for the AFL-NFL merger.

The differences between the Jets and Giants bubbled beneath the surface for many, as fans of both teams made their way inside MetLife Stadium.

Two teams, one stadium
The Jets set the early tempo in the game, using their vaunted defense to control quarterback Eli Manning and the Giants during the opening series. Jets' fans celebrated by cheering and waving white-and-green rally towels, while the Giants' contingent silently observed the proceedings.

Gang Green made the most of their first possession, driving 47 yards to the Giants' 5-yard-line. From there, quarterback Mark Sanchez hit H-back Josh Baker with a touchdown pass! With 7:56 remaining in the 1st quarter, the Jets led their intra-stadium rivals 7-0, and those wearing Jets' apparel couldn't be happier with the early results. 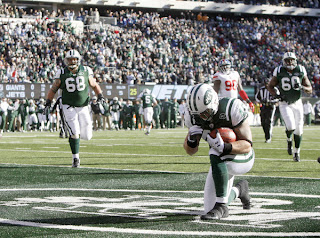 Josh Baker takes a moment for himself after scoring a touchdown (Getty Images)
Looking around from my familiar seat in Section 327, I saw a healthy representation of both Jets and Giants fans in the building. While it was designated as a Jets' home game, the holiday season allowed many Giants' fans the opportunity to obtain tickets and support their team. 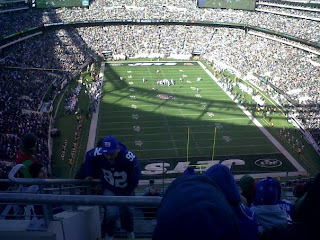 Giants' fans were well-represented, even though it was a "road" game for them
The Jets maintained their 7-0 lead into the 2nd quarter, giving those wearing blue-and-red cause for concern. Could the Giants, who have been reeling for over a month, straighten things out and save their season against an equally-desperate team?

Big Blue made some small positive strides by driving 53 yards to the Jets' 2-yard-line. The defense would not relent, however, and the Giants were forced to settle for a 21-yard Lawrence Tynes field goal to make it 7-3. 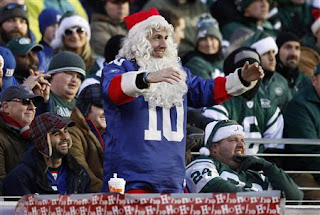 Santa finally delivered the Giants some points in the 2nd quarter (Reuters)
Heading into the latter stages of the 1st half, one play changed the entire complexion of the game.

With 2:37 left in the 2nd quarter, Jets' punter T.J. Conley unleashed a beautiful kick that was downed at the Giants' 1-yard-line. Manning threw two incomplete passes out of his own end zone, setting up 3rd and 10. Jets' fans were salivating -- their team could end up with either a safety or great field position. They couldn't have envisioned what would happen next. 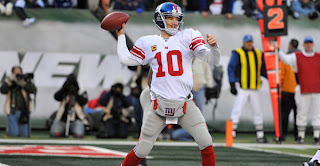 Eli Manning was throwing out of his own end zone against the tough Jets' defense (Getty Images)
Operating out of the shotgun, Manning took the snap and initially looked to his left. Thanks to good blocking by his offensive line, the 8th-year QB had time to survey the field. He found wide receiver Victor Cruz to his right, near the 1st down marker. Cruz made the catch, evaded defenders Antonio Cromartie and Kyle Wilson, then disappeared downfield. Using every ounce of speed at his disposal, Cruz ran untouched down the sideline, en route to a 99-yard touchdown play! 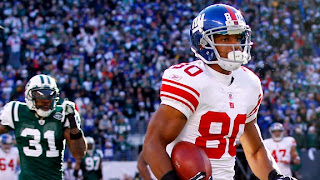 Victor Cruz runs free on a 99-yard touchdown reception (U.S. Presswire)
The Giants' fans cheers built at every step downfield, while Jets' fans slumped deeper into their seats as Cruz raced closer to the end zone. Upon crossing the goal line, Cruz emphatically spiked the ball in celebration -- and with that, inserted a dagger into the Jets' collective heart.

As Tynes kicked the extra point, the crowd reactions told the entire story. Those wearing green were left scratching their heads, while those dressed in blue were confidently puffing out their chests. The score said 10-7, but this game was now firmly in the Giants' grasp. 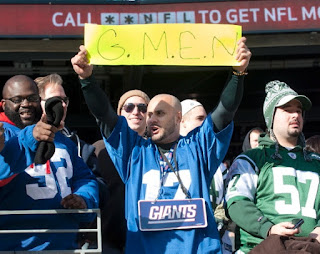 Giants' fans were feeling good after Cruz's big scoring play (NY Daily News)
After the Jets missed a 44-yard field goal attempt at the end of the 1st half, the Giants carried the momentum into the 3rd quarter. Using old-school, hard-nosed defense, the Jets were forced to punt on all four of their possessions.

At the end of the period, the Giants mounted another scoring drive. Following big plays from Cruz and Brandon Jacobs, running back Ahmad Bradshaw plowed over safety Brodney Pool on a 14-yard touchdown scamper, giving Big Blue a 17-7 lead with :13 remaining. 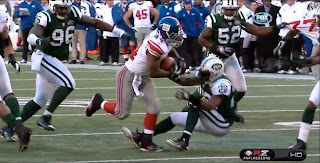 Ahmad Bradshaw runs over Brodney Pool during his 3rd quarter TD run (sportsgrid.com)
Things would continue going the Giants' way into the 4th quarter. A Mark Sanchez interception resulted in another field goal by Tynes, making it a 20-7 game. Then, after driving to the Giants' 1-yard-line, Sanchez fumbled the snap into the end zone, resulting in a defensive recovery and touchback. 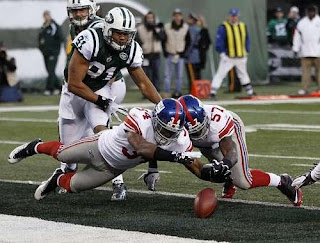 The Giants' defense recovers a Mark Sanchez fumble in the end zone (NY Post)
While Giants' fans in the seating area sought each other out for high-fives and hugs, some Jets' fans dejectedly started to head for the exits -- their Christmas Eve at least temporarily ruined.

Midway through the 4th quarter, Sanchez scored on a 1-yard QB bootleg, bringing the Jets' deficit to 20-14. While the touchdown provided some new life for the home team, it only delayed the inevitable outcome. 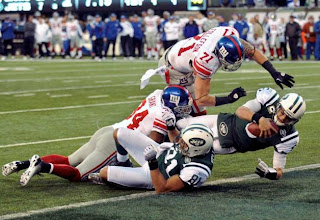 Sanchez scores on a bootleg run in the 4th quarter (AP Photo)
With 2:24 remaining, the Jets had the ball at their own 8-yard-line, needing a touchdown to escape defeat. On the first play, Sanchez dropped back to pass and was pressured by the Giants' defense. Retreating into the end zone, the 3rd-year pro launched a desperation pass as he was being tackled by defensive lineman Chris Canty. The ball was caught by an offensive lineman, resulting in a penalty. Since Sanchez was in the end zone at the time of the pass, the officials ruled it a safety, making it 22-14, Giants. 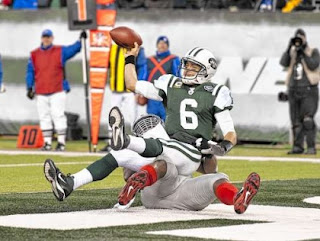 Sanchez is pressured by Chris Canty, resulting in a safety for the Giants (NY Daily News)
After a failed onside kick by the Jets, Bradshaw scored his 2nd TD of the game -- rumbling into the end zone from 19 yards out to secure a 29-14 Giants' victory, and put the final nail in the Jets' coffin.

As the clock reached :00, Giants' fans hooted and hollered. Echoing throughout the exit ramps were happy chants of "Giants' Stadium!!!" from those wearing blue, while Jets' fans could only hang their heads and wonder, "What if?" Once again, the kid brother of New York professional football was forced to play second-fiddle. 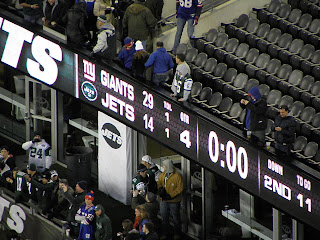 Bragging rights go to the Giants
Outside MetLife Stadium, the exterior was lit in green, as is customary after every Jets' home game. But on this day, it truly should have been blue. That would have matched both the Giants' main color and Jets fans' emotions following the game. 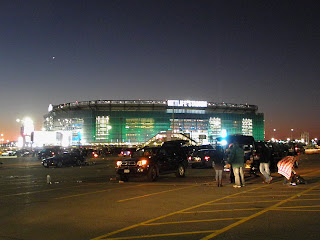 MetLife Stadium was lit in green, but it belonged to the Giants on Christmas Eve
Upon leaving the parking lot, many fans headed home to begin their Christmas parties or continue their Hanukkah celebrations. Regardless of religion or rooting interest, 79,088 people gathered for a unique event that coincided with a major holiday. I was lucky enough to be there.

In the NFL, 'tis the season for Wild Cards, division champions and Super Bowl wishes. While some teams receive the gift of hope at the end of the regular season, others are left with coal in their stockings.

That's what makes this time of year fun -- you just never know what might happen.

Season's Greetings at the Meadowlands
Posted by Dave Polaski at 11:14 PM No comments:

Dave Polaski
I'm a radio news anchor & reporter with Townsquare Media; mainly on the company's flagship station: New Jersey 101.5 FM. During my 7+ years on-air, I have earned numerous accolades, including three awards from the Associated Press of New Jersey. My real passion, however, is sports. I've attended hundreds of sporting events over the years, both college and professional. In late 2010, it occurred to me that I should combine my love for sports with my journalistic acumen. Thus, "The Experience" came to fruition. Perhaps this can lead to new and exciting sports journalism opportunities, or maybe it'll simply end up as an outlet for the wonderful stories that I encounter. Either way, I hope you enjoy them. Thanks for reading! Feedback/questions: dpolaski@hotmail.com